What to Check Before Your First Spring Classic Car Drive 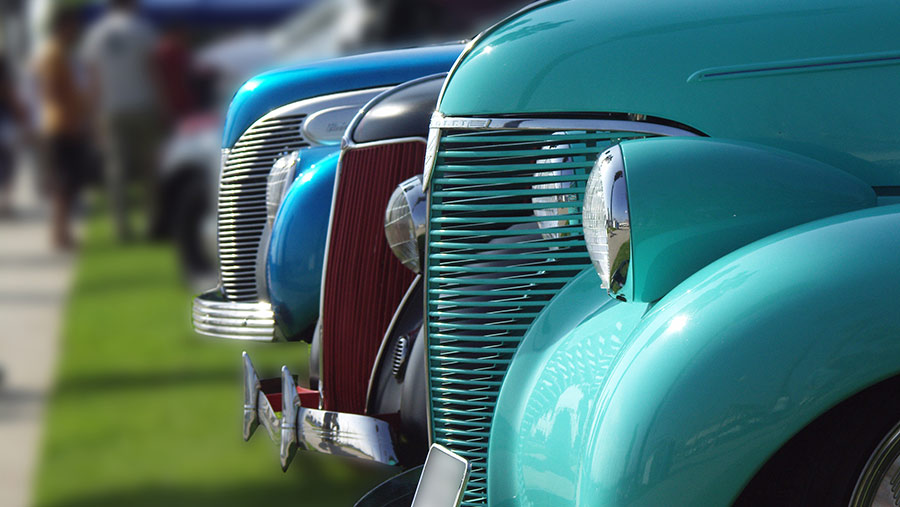 If you’re reading this, you almost certainly have a non-daily-driven classic car somewhere in a locked garage.

But you need to check a few things first.

Assuming the antique car has been sitting over the winter, say three to six months, the list below should be pretty good.

If, when you roll open the garage door for the first time in months, one of your car’s tires is wheel-on-the-cement flat, you kind of have to start with the tires, so let’s. Obviously, if that’s the case, you need to air that tire up before you can move the car. If you don’t have a compressor in the garage, buy a portable compressor that runs off the cigarette lighter socket, or better yet, runs off 12V DC or a 120VAC adapter. I’ll air up the tire and then see what it’s going to do. If you immediately hear it hissing from a puncture or a bad valve stem, then you need to stop everything, jack up the car, pull the wheel off, and either swap on another wheel and tire or get this one fixed. But if you don’t, you can see whether the leak deflates the tire over hours or days. Just remember that it deflated over the winter, so it’s going to do it again.

Then, check the pressure of all four tires. While you’re doing that, it’s a good idea to inspect the tire sidewalls for cracking. Odds are that if the car is stored indoors, the tires aren’t going to get much worse over a single winter, but it’s easy for 10 years to go by one winter at a time and the tires to cross from old-but-OK to sheeh-I-don’t-want-to-drive-farther-than-to-the-gas-station-on-those.

If the battery has been on a tender or trickle-charger for the winter, it’s probably fine. But if not, you can take a multimeter, set it to measure voltage, and put the two probes on the battery terminals. If it reads 12.6 volts, or near it, the battery is fully charged, and if it’s in good health and the cable connections are good, it should turn the engine over. But with every 0.2-volt drop, the battery loses about 25 percent of its cranking power, so if it’s reading closer to 12 volts than 12.6, it’s unlikely to crank the engine over without being connected to a good three-stage battery charger for several hours. So measure it, and if you need to charge it, charge it.

Check the oil, coolant, and brake fluid levels. If the oil looks black, make a note to change it soon. Give a quick look inside the radiator or expansion tank to both check the level and see if there’s any oil in there indicating a weakening head gasket.

Next, look under the engine compartment for evidence of leaks. Hopefully all you find is a few dots of oil from where the car’s been leaking out the front timing cover for the last 40 years and nothing more. Anything green is antifreeze, and its source should be identified before you drive the car, as a minor leak can quickly mushroom into a gusher. Blue liquid can be either antifreeze or washer fluid. Clear liquids are usually power steering or brake fluid.

Move to the back of the car where the fuel tank is, skooch under, look, and sniff. Vintage cars have metal fuel tanks, and they can leak from age, particularly with Ethanol’s propensity for attracting water. Since it’s good practice to store a car with a full tank of gas (this eliminates the chance for humid air to get into the tank and contaminate the gas with water), if you find the tank leaking, it ruins your day, since you now need to drain it. Gas can also leak from rotted or cracked rubber fuel lines. Gasoline isn’t like oil or antifreeze; there should be a zero-tolerance policy for any amount of fuel leakage. You should also sniff in the engine compartment to be certain gas isn’t leaking there.

If your garage has an affinity for rodents and they’ve made your car home, they can deposit a lot of material in the air cleaner in a short amount of time. It’s good insurance to pop the top off the air cleaner and have a quick look. Hoses and belts

Give the hoses and belts a quick inspection. Squeeze the hoses. If any of them are pillow-y soft, order replacements. Inspect the belts for cracks and cuts and put a thumb on each of them to check the tension. If they’re obviously loose, take a moment and tighten them.

If the car has passed the above checks, the engine is ready to be cranked. If the battery is fully charged and registering about 12.6 volts, it should crank when you turn the key. If it doesn’t crank, clean the battery and cable terminals and try again. If the voltage is a little low, you can jump-start the car, but if the battery is deeply drained (turn the key and you get a click of the starter but that’s all), or worse, flatlined (less than 10.5 volts, or the car’s dash lights barely even turn on), it’s best to replace it before you drive the car. Alternators aren’t designed to charge deeply discharged batteries. Although old analog cars often don’t seem to mind, post-OBDII cars with a proliferation of electronic control modules can do very odd things, including bucking and dying, if a deeply discharged battery is jump-started and the car is driven.

If the car is fuel injected, it will likely start in just a few seconds when the starter is cranked. If it doesn’t, the fuel pump may not be running, either due to a popped fuse, stuck relay, or the pump itself. Carbureted cars often take much longer to start due to the lower fuel pump pressure, the need to refill the float bowls, the far less precise air/fuel metering, and the lack of direct spray into the cylinders. A short blast of starting fluid into the carburetor throat can coax the engine to life. If a carbureted car still won’t start after sitting, the problem is often that an old fuel line has become dry-rotted and is sucking air rather than fuel.

Once the engine is running, let it idle for about a minute. Then shut it off and look under the engine for any fluid dripping or streaming out.

Twice around the block

It’s common for brake pads to stick to rotors from sitting. If the car has been stored indoors, the rotors probably won’t have rusted much, but still you want to scope it out. Take the car for an easy lap around the block. Brake gently to verify that the brake pedal is firm and functional, then more firmly. Pick up speed and do it again. Note any brake pedal shudder (pulsation), pulling to one side, and steering wheel shimmy. Pull back into the driveway and check again for any fluid leakage.

Take the car up onto the highway or other road where you can build speed. Verify that it comes up to operating temperature in about the middle of the gauge and stays there. Continue to test the brakes for shuddering or pulling. If the brake pedal is still pulsating, there are still unwiped deposits on it. A series of hard braking exercises (first verifying that no one is behind you) may wipe the rotors clean, or you may find that it doesn’t go away and you need to buy new rotors. If there’s steering wheel shimmy that wasn’t there in the fall, it’s likely the tires are flat-spotted from sitting. It may go away. It may not. Come home, recheck for fluid leakage, and check again the next morning.

If the car passes these tests,it’s in about the same condition it was in when put away in the fall and ready to enjoy in the spring. But keep in mind that it doesn’t mean that the car has been healed of any known problems. Cars are not biological systems; they don’t mend themselves with a good long sleep.